In a hectic December I managed to go along to Devoxx in Antwerp, Belgium. Devoxx (Voxx is Latin for 'voice') used to be called Javapolis and is a Java and other JVM languages conference. This was the first time I'd been to an industry conference and it is certainly something I intend to continue. 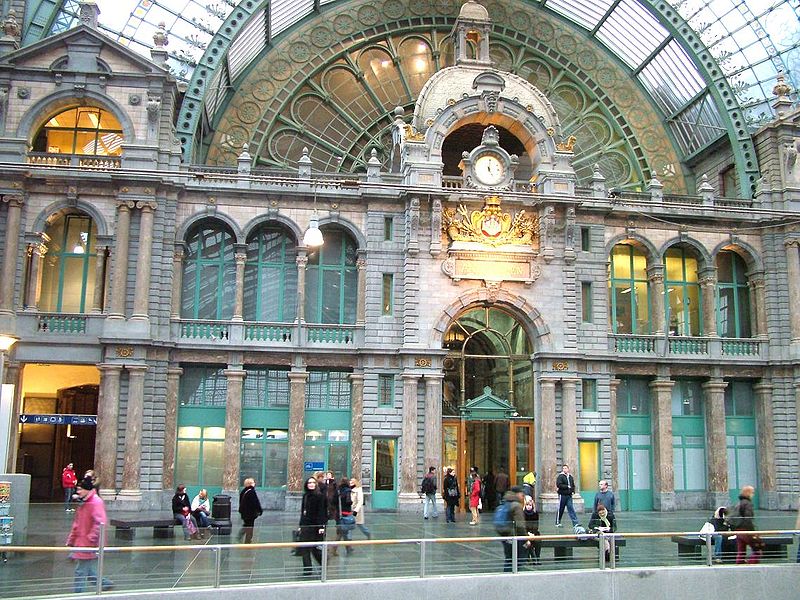 On the way over to Antwerp from Glasgow I was amused by an old lady who when told she couldn't have pie and beans on the plane promptly asked for a stick of rock and a cheese sandwich instead. I'm with her on the unhealthy plane meals revolution! I later arrived at Antwerp train station which is probably the most impressive train station I've ever seen. While still in UK mode I then hailed a taxi and tried to get into the passengers side for UK cars (which is the drivers seat in Europe). After convincing the driver that I didn't want to steal his vehicle I then told him where I needed to go. He struck me with a confused look, asked if I was sure, then pointed to my hotel straight across the road. Kudos to him for not driving me around town then dropping me off at the same spot.

I chose the flights and the hotel myself (on JPMs dime) so I only have myself to blame for the hotel I chose. After quickly figuring out that the locals in Antwerp do not speak French or English and that I've never wanted to learn Dutch in my life, I realised this was going to get complicated. I arrived to my room after walking over a patch of dried blood. Luckily enough the tv had UK channels so I was able to watch the news and football in my room. It was around this time that the incessant knocking began. I had somehow booked a hotel which was also a Leprechaun retirement home. Every pipe in the building seemed to have a steady knocking sound like someone was hitting it with a hammer.

When I go abroad I use the same suitcase which was a corkscrew, a photocopy of my passport and some coins. I have now figured out that there is another thing I'm missing....a power converter. I wasted a lot of time going round stores in Antwerp unsuccessfully looking for a UK->Euro converter. My hotel unsurprisingly didn't have one so I resorted to asking randoms if I can charge my iPhone off their USB ports (not cool).

The conference itself was a 3 day affair for me. It was hosted at a purpose built cinema/exhibition hall at the North of Antwerp which was easily accessible from the brilliant and cheap Tram system. All the big players in the Java space were there (including MS touting their Silverlight tech) and offering assorted goodies to get you to visit their stalls. The badge you got had an optional RFID tag which you could use at vendor booths to give your details over. It was also used to show you how full each room was and with what nationality. There were over 3000 attendees but only 100 were from the UK. Holland and Belgium by far had the largest mindshare, though everyone was speaking English (go old empire!)

Each day there were 6 timeslots for talks and you had a choice of different talks to attend. At the end of each day there would be free beer and games like fussball/wii. I really enjoyed going to Devoxx but I can't say that I'd like to go to a conference alone again. I'd talk to someone who was sitting next to me at the start but you were always going to a different talk after and you'd never see them again! This was more difficult in the evenings as I had to go to restaurants alone (something I've never done before). Since I didn't have any command of Dutch, I frequented Italian restaurants as I could still remember my tourist Italian from our Honeymoon to Florence.

One close call I had was when I got into the rhythm of asking the person next to me if they had been to a Java conference before and what talks they were excited about. I was about to do this during Brian Goetz's concurrency talk but the talk started just as I was about to ask the same line of questions to the middle aged bloke sitting next to me. During the Q&A part of Brian's talk the bloke next to me and put up his hand. Brian Goetz then said "Ah, I see Joshua Bloch has a question". That's right, I was about to ask the Chief Java Architect at Google if he had been to a conference before. Apart from writing large parts of the Java language, the guy was doing the keynote speech the next day!

A nice touch at the conference was the Whiteboards spread around the entrance. They had questions asking for your opinion on upcoming Java features and what people are working with today. I couldn't resist helping start a TopGear-esque Cool Wall. The results are available online now from the devoxx site.

If you work in an Industry where you need to get training every now and again which usually costs around a grand. Ask your boss if instead of going on the exorbitantly priced training course, you would like to use around 3/4 of the same cash to go to a foreign country and have a great time (while learning!). It worked for me anyway.