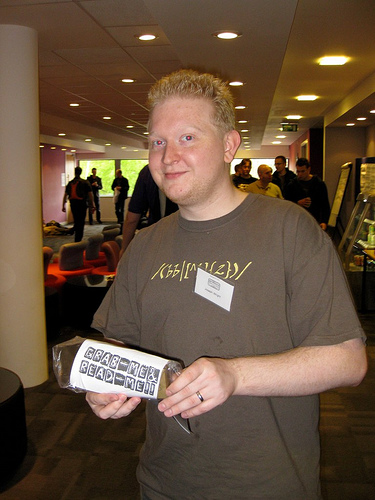 This week has been a great week for hearing about new tech. On Tuesday I did a presentation at work about Hudson and Sonar. Hudson is a CI server and Sonar is a great way to track metrics on your codebase.

On Wednesday I went along to the Java User Group Scotland and checked out a great talk done by Selcuk Bozdag on Flex development. Flex allows you to make pretty cool Flash based applications which can talk to remote services. It isn't tied to Java like I originally thought. There's an awful lot of out of the box charting and video tools which seem useful.

On Saturday I went along to the Microsoft sponsored Developer Day event. They had 4 different tracts offering mainly .NET and MS SQL Server talks. I enjoyed listening to the Virtulisation and Ruby on .NET talks especially. I then managed to find some Perl/Flex developers I could talk loudly about the evil that is IE6 to restore the balance.

While at the conference I was approached by some guys from the disposable memory project who were at my talk the previous week at the Glasgow Techmeetup. They handed me a modded film based camera with instructions to hand it to someone else after a single usage and after all the exposures were used the last person would hand it back to someone else. Hopefully I'll get to see what this led to!